Okay, okay, I know. This isn’t a politics blog, but I think this new Affordable Care Act may soon change how much beer I can purchase, because this household just lost some money.

I identify as a Democrat, on normal days. Most times I’m a Moderate, or a I vote for what I believe, not what my party says type of person. I voted for Obama, and I was stoked for “Obamacare” or the “Affordable Care Act.” As some of you may know, companies are getting ready to start implementing most of these new policies in 2014. This means that they’re looking at labor costs and healthcare costs this far in advance.

My boyfriend works for a university kitchen. It’s unionized, so when he hired in he was given a quota of about 1,000 hours for the year, and told that after that he’d be laid off for a little while (maybe as little as a week) and then be rehired with a significant pay bump and be part of the union (by significant, I mean around a $4 increase).  Yesterday, citing the Affordable Care Act, he bosses informed him that he still had a quota of 1,000 hours, and then after that he could be laid off for months or weeks, depending. When he does get hired back, though, he can expect to not get a pay bump or an hour increase like he was originally promised. The reason? If an employee works over 30 hours he is eligible for healthcare. While I believe this should have been the case ages ago, what his company is doing is hiring no full time employees and not increasing pay so that they don’t lose money. The unions are apparently already getting on the college for that, but, since my boyfriend isn’t a part of the union, I don’t think we’ll see any help from them.

Ryan has been living without heathcare all of his adult life. While I’m excited that he’ll qualify for free Medicaid (I believe, I’d have too look more into it), a few check-ups aren’t really going to outweigh the cost of the loss of hours and the pay increase we were really hoping for.  Additionally, even if he were to go try and find another job as a cook somewhere else, there’s a high probability that they’re doing the same thing as the university kitchen.

Any thoughts on the Affordable Care Act? I found this article at the Huffington Post which explains a little what Ryan is going through.

I’m not a very good blogger. I’ve found this out about half a dozen times over the years. I could link you to a plethora of blogs I’ve started and abandoned along the way, because… well… I suck.  I like to write, but then I find that no one is reading/I sound like I’m whining/ I’d rather keep a hand written journal (which I do for about four days) and then I just stop.

Things have been pretty rocky over here. Not really like terrible, no good, rotten, very  bad day bad, but at least this week has been frustrating. I had to tell a friend of mine that I couldn’t go to her wedding in Utah (I live in Michigan) because I couldn’t:

I don’t think it went over well.

I also have to deal with a super Control Freak who needs to be involved with EVERYTHING at work, including infamously telling me how to use Clip Art in Microsoft Word, and that we should type out “Road” in an address instead of writing “Rd.” so that people don’t get confused…. It’s like that every day.

This week my dog also got sick on the carpet, I got pulled over twice in one day for a taillight being out, I will have worked 8 hours of overtime, I feel like I’ll never find a job that’s worth my salt, and just a few other things have gone wrong this week. As Boyfriend has been saying today, “Everything is made of farts.”

I’ll see if I can get a beer review sometime this weekend, though. I’m working Saturday, but afterwards God knows I’ m going to the bar.

Thank you for the 101 views! I have some posts brewing (haha, brewing– get it?) but I haven’t had a chance to write them since I’ve been working a lot and TODAY I have an interview at another job! It’s like Ryan says, you’re statistically more likely to get an interview if you’re already employed.

Anyway, cheers to the weekend! Enjoy!

Sorry for the minute absence.  I had a long post written out and then the computer decided to shut down on me and not save it. I get agitated with losing my work (who doesn’t?) so I never re-wrote the post. This will be a poor substitute, I’m afraid, but I’m going to try and give you my review on the new nano-brewery in Lansing called EagleMonk.

The Boyfriend and I visited there a few days ago. It was kind of out of our way, about 15 or so minutes, but for a new nanobrew I’m always willing to travel at least a little bit.  As we walked in, we could tell the place was already a hit among the locals; the place was full, even though their official opening isn’t until August 26th. We were lucky enough to snag the last two seats at the bar. We noticed also that EagleMonk has their own Mug Club, which was somewhat surprising because the mugs seemed to look similar to Ryan Dalman’s (who makes Blackrocks‘ mugs).  We asked one of the owners,  Sonia Buonodo, who their artist was and discovered that, although it wasn’t Dalman, it was one of his friends.  I can’t remember the name, unfortunately, but they were nice. The patterns weren’t as elaborate as Dalman’s, but the artist made the mugs lighter and used charming solid colors.

We talked for a while with Sonia. It turns out that EagleMonk is a part of the Michigan Brewers’ Guild, so you can get other guild growlers filled there. We liked that, because since it’s so out of the way we probably won’t drink there so often (especially since we’re out of practice, but I’ll get to that later). After we talked with Sonia, we ordered our beers. I got the Marcy Sweet Stout (5.1% APV). It was one of the better American stouts I’ve had the privilege of trying.  The beer had notes of chocolate and coffee in its aroma and the taste was sweet and smooth. It wasn’t dense or dry;  indeed, it was very drinkable.   I also tried the Pale Ale, which was made with British pale malt and victory malt. The menu says it has a “bready” taste, which isn’t inaccurate.  The smell and taste are both mildly hoppy. Ultimately, a solid pale ale, but really not the best I’ve ever had.  Boyfriend (I should just start calling him Ryan) tried the Red Eye Rye and the IPA. Both were good, but I can’t remember enough about them to give them any sort of review.  But back to why I said we’re out of practice. Ryan and I used to be able to drink two or three mugs at Blackrocks (who often brews heavy APV beers and we had a bit more than a pint in each mug) but after two pints at Eaglemonk we were almost done in. They weren’t even that high of APVs! It was ridiculous, and I hope to get back into the habit of drinking more once we each get paychecks from our new jobs (we both got new jobs on the same day last week!).

My only complaint about EagleMonk would be their “pints” don’t seem to be true pints. For $4.00 (which I know isn’t THAT pricey, but it is when you’re used to Blackrocks) I expected a full pint. I may be wrong, but the glasses seemed small. Their mugs seemed tiny as well for $50.

EagleMonk is worth the visit, but I’m not sure I’d go out of my way to go there. Maybe once their more established I’d venture in again.

As a side note, I’ll be getting my camera back from my mom soon so I can post pictures of some of these brews and breweries!

So I just probably made a purchase I will love but shouldn’t have made. I haven’t mentioned it before, but I’m a huge book nerd. I read so much it’s a little sickening. You can check out my Goodreads  if you want to share books with me (it’s also on the sidebar). Anyway, I just bought the book Tasting Beer: An Insider’s Guide to the World’s Greatest Drink by Randy Mosher because it has 5/5 stars and that’s kind of rare, and I’m interested in learning more about the whole beer-experience.

Can I just say, um… yes? I’m super excited about this purchase and I’ll be sharing what I discover as I read. Have any of you read this book or have any other beer book recommendations? I think that having this beer blog is going to eventually accumulate into me trying my hand at brewing my own beer, in which case, any books about brewing you guys would recommend?

I tried Founders Porter for the first time today, and boy is it fabulous. It’s APV is 6.5% and it’s a rich beer with coffee and chocolate blended together with a nice amount of hoppy flavor and spice. There’s little to no head (not in the draft pour I had, anyways) but the smell is deep and robust.  The color is a dark brown/black. The chocolate notes don’t overpower, although they seem to get stronger as you drink it for, if you ask me, a pretty solid finish. The first few sips, though, are just divine. Somewhat spicy– possibly alcohol or pepper? Overall, though, the porter is sweet and good for those days when you’re just craving dessert.

Founder’s hardly ever disappoints and this is no exception. I’d have it again and again (and again).

My mother’s birthday was on Saturday so we went to a golf-course and ate ribs. This wasn’t really the place that had a ton of craft beer on tap, but they did have the Frankenmuth American-Style IPA, called Batch 69. As an aside, according to their website, the Frankenmuth Brewery is the oldest brewery in Michigan and has a free beer tour (which means boyfriend and I are going to have to take a visit once we’re both employed).

The IPA was pretty good. My dad, boyfriend, and I had a mug each and by the end of the mug I was kind of feeling it. Since looking it up, I found out that the ABV is only 6.9%, so I probably just haven’t been drinking enough. Either way, the IPA tasted really hoppy, but it didn’t have that terrible (sorry IPA drinkers) hoppy after-taste. It’s a really bitter beer with some citrus notes It poured a nice deep amber color, but its head was lacking– there was nothing to it. As an IPA goes, I’d say it’s pretty middle-of-the-road. There’s no reason go to searching this one out. 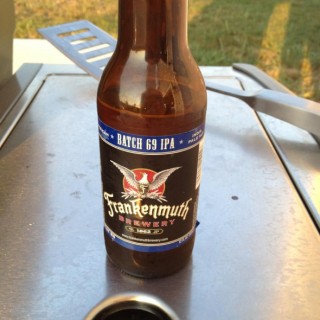 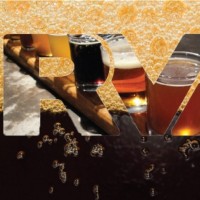 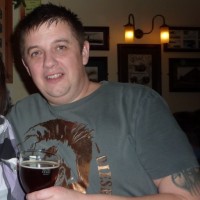 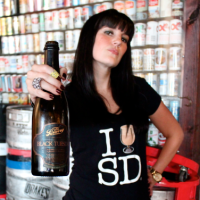 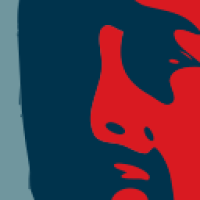 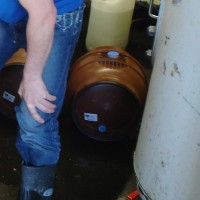 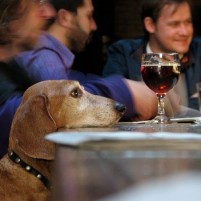 We review craft beer from around the world.

Let me tell you what I'm really thinking

This is Not Going to Turn Out Well

Blogging at World of Beer

the temporary home of Stephen Beaumont's World of Beer

Saving the world one beer at a time

Great beer, great food, and everything in between...

I run a lot and sometimes I write things

In Leeds, Airstrip One, a beer prole struggles to achieve consciousness, one pint of wallop at a time.

The Dogs of Beer

Home of the Delaware Beer Blog - Drinker of beer. Writer of stuff.

Ales to Stouts
Blog at WordPress.com.